Why is Christmas such a bastard? 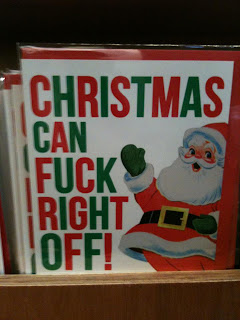 I often refer to Christmas as 'Bastard Christmas', because I have found it to be a very depressing time of year.  I'm sure others agree with me, Scrooge for one, and the Grinch, but also because in my A&E dept we see a lot of suicides and domestic violence around this time of year.  Gruff Rhys, singer from the Super Furry Animals and solo artist, also agrees with me, he has released an EP called 'The Atheist Christmas EP' which includes such joyless hits as 'Slashed wrists this xmas'.  I would like to point out, however, that I am NOT what you could term a 'scrooge', I do make the most of the Xmas, I worked as a Santa's Helper in an actual Santa's grotto for 3 YEARS RUNNING!  I am a big fan of booze, chocolate and presents, and indulge in all 3, but usually I'm drinking booze and stuffing chocolate down my neck to try to get rid of the Yuletide despair I tend to suffer from every year.

I had a little look at why when some fools go around squeaking about how much they love xmas, some of us would rather just fuck it all off and this is what I found.  Mind conducted an on- line poll in 2008 which showed that the main reason people feel depressed at Christmas seemed to be down to financial problems.  Christmas does cost a lot of money, and spending loads of cash on a load of old shit seems to fill people with disgust, especially during the current financial fuck up where people don't have much to begin with.  The Independent reports this week that the suicide rate in Greece has risen by 40% since their economy went to shit, prior to this it was the lowest in Europe, thus proving that if the economy is fucked, people start to get depressed.  I do agree that money problems cause a lot of stress and the daily grind to try and get enough cash together to get by does ruin your soul somewhat if you're unlucky enough to be that skint, but I don't think this is the reason why I hate Christmas so much.
The Depression Alliance has printed a leaflet specifically targeting people who feel depressed at Christmas, to provide information about services and support available if you're feeling low.  In this leaflet, the reasons for feeling low given are money problems and loneliness and isolation if you live alone.  This didn't really explain why I always feel shit at xmas, because I am lucky and have a family and friends, which I see at xmas and do the usual celebratory things with.

Ray B. Williams, writing for Psychology Today says:-
"Xmas appears to be a trigger to engage in excessive self reflection and rumination about inadequacies of life"  This statement explains partly why I feel low at Christmas.  I look at my own life against the sickeningly sweet romantic and family based fantasies going on all over the place.  A lot of my horrendous romantic failures have occurred around the Xmas period.  I've been out with a few shit men, and they have often been known to dump me just before xmas (to avoid buying a gift no doubt), also the heart wrenching love affair I had with a married woman which all kicked off at xmas, leaving me distraught the following year when she'd left me and every Christmas event sparked off memories of the previous year with her.  I was to be found at midnight on New Years Eve, crying in the toilet.  It was shit.
This goes some way to explaining why Xmas is a bastard, but I can't really put my finger on why I find it so particularly awful.  All I know is that it's 2 weeks of the year where I am vulnerable, confused and depressed. The benefit of it is that during this time I crave my normal life so much that when January comes around and I can go back to normality I am very grateful.

LL x
Posted by Liqouricelady at 12:24

Liqouricelady
My blog is about my experiences of depression, or the 'black dog'. However, it is not:- 1. A list of shit things that have happened to me 2. A place where I can whinge 3. A step by step guide to curing depression. I discuss issues surrounding depression and my experiences with it in a way that might be funny. You can also follow me on twitter, liqouricelady@twitter.com