If Depression could talk... 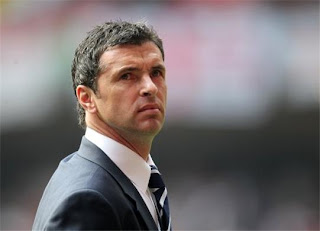 RIP Gary Speed
I'm still currently thinking about the Vagina Monologues, which I went to see a bit ago.  There was a section in it where women were asked two questions, one was 'If your vagina got dressed, what would it wear?' and the other was, 'If your vagina could speak, what would it say?'.  Then I came across this tweet, by @GarethAveyard.
"Depression thrives on darkness. Shove the dirty bastard into the light, in its dressing gown, balls clanging in the wind. Talk about it"
As he had created the image there that depression was a person, in a dressing gown, with balls, this got me thinking about depression as a being, like a person, or the 'black dog' as it is often called.  Then I got around to thinking if it got dressed, what would it wear? If it could speak, what would it say?

If my depression got dressed, it would wear black, obviously, very predictable.  If it was a person, I think it would be a man actually.  This, in the Freudian sense of things, probably speaks VOLUMES about me, as it is though, I'm not really gonna think too much about why my depression is a man.  I think it would wear black because when I am depressed, I see the world in black and white.  There are no colours then and it is dark.  In fact, I think my depression reminds me of the character 'Lasher' in the Anne Rice novels about the Mayfair witches.  Lasher is a good looking male spirit, who haunts this family of witches. Although they fear and hate him, they also love him.  He basically seduces them in the end.  Sometimes he is quiet, and they don't see him, sometimes he whispers to them.  He is dressed in neat, smart clothes, and is quite dapper. I think my depression is like him.

Something about the tweet made me recoil though, as @GarethAveyard obviously has a lot of venom towards depression, and I don't think I have that.  That's why mine is like Lasher, it obviously harms me and makes me miserable but I don't know if I hate it.  It's such a part of me, having been around ever since I was 14, maybe it has seduced me.  Is this a good or a bad thing?

One thing that is for sure though, considering if my depression could talk what it would say, is that it wouldn't say anything.  Depression loves silence.  This is something that I have been reminded of this week with the death of Gary Speed.  Gary Speed hung himself on Sunday morning, having never showed any signs of being unhappy to anyone, not his wife, his friends or his family.  While we all struggle to understand this, I remembered how I felt at my worst, when I was 17 and had been depressed for 3 years and no one knew.  If I had not had the support I had then, with people around me who actually had experience with depression and understood it, my story could have been the same.  I could have committed suicide and no one would have known that I had been depressed.  Unfortunately, I have heard stories like this before about men, and this is why I worry about them.  They don't talk, they keep silent, which depression loves.

This is why I want to echo the sentiment in @GarethAveyard's tweet, we need to talk about depression, and this is why I write this blog.

p.s. My vagina would have a walk in wardrobe, with an array of clothes in every possible colour, style and fabric.  It would say 'Hello'.  You may think this is boring, but you haven't heard the way it says it.

p.p.s. If my vagina could talk to my depression, it would tell it to fuck off.
Posted by Liqouricelady at 04:18

Liqouricelady
My blog is about my experiences of depression, or the 'black dog'. However, it is not:- 1. A list of shit things that have happened to me 2. A place where I can whinge 3. A step by step guide to curing depression. I discuss issues surrounding depression and my experiences with it in a way that might be funny. You can also follow me on twitter, liqouricelady@twitter.com